Categorized as: Boys’ Learning and Education 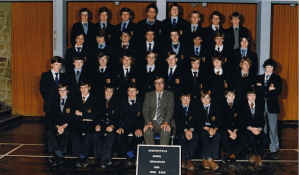 I write this post for two reasons. I write in honor of the women in my life who have fought breast cancer, as this is Breast Cancer Awareness month. And I write in response to the September 23, 2011 study in Science Magazine titled “The Pseudoscience of Single-Sex Schooling.” I challenge its incendiary and unsubstantiated claims that “segregating” boys and girls by gender is similar to the racial segregation of African-American children in the southern schools of decades ago, and that it “increases gender stereotyping and legitimizes institutionalized sexism.” Here is a small window into my life in a boys’ school, and the transformation I observed, not just in the boys themselves, but in myself as a woman. Read more…

Boys, boys’ education, and how boys learn in America are popular topics among parents and schools these days. Crosby, Stills, Nash & Young sang that we should teach our children well and feed them of our dreams, but for millions of parents of sons, dreams are only that, and boys are falling behind educationally at an alarming rate in this country.  According to Michael Gurian, author of the book titled The Minds of Boys: Saving Our Sons from Falling Behind in School and in Life, boys get the majority of D’s and F’s in most schools, make up 80% of the discipline problems, are four times more likely than girls to be diagnosed with ADHD and medicated, account for 70% of diagnosed learning disabilities, become 80% of the high school dropouts, and now make up less than 44% of the college population.  If you look in your newspaper in June, you will see the photos and bios of valedictorians from many of your local high schools, and will notice that the majority of them these days are girls.  Our boys need our attention, and although some of what I’m about to write pertains to girls as well as boys, and although gender differences naturally fall across a continuum and no single description fits all boys or all girls, there are nonetheless a number of characteristics that differentiate the two genders generally speaking.

As the mother of a female only child, my parenting experience, while not always idyllic, has been relatively peaceful.  As a toddler, my daughter was sedentary and cautious, and seemed to have nowhere she needed to go.  She would sit in one spot on the floor for hours with a pile of books, “reading” to herself.  I could shoot from room to room accomplishing tasks, and she would smile up at me from her place on the living room rug as if wondering, what’s the hurry?  She was much like I was as a child, and nothing like the brothers I had grown up with who requisitioned large expanses of the floor plan of our house for their games, commandeering space like an army of two.  The entire finished basement was needed for indoor hockey (and windows were expendable).  Outdoors, acres of woods were barely enough for their imaginary villages and the conquering of foreign lands. Unwitting trees were the patient recipients of nails and ropes and bungee cords, bending uncomplainingly to the weight of whatever animate or inanimate objects were tied, strapped or hung from them.  Once, my brother devised a pulley system to ferry a dangling ceramic soap dish full of birdseed back and forth between his bedroom window on the third floor and a distant pine tree in the back yard, only to have it immediately collapse under its own weight, sending the heavy chunk of porcelain careening downward in a 90-degree arc until it came into abrupt contact with a doomed sliding glass door.  This was a terrific lesson in physics.  It was also funny.

Boys learn by doing and by moving their bodies through space.  As Gurian explains in his book, the primitive hunters men used to be were the product of hundreds of thousands of years of evolution.  Spatially-developed male brains resulted from physical interaction with the environment that allowed sensory input to stimulate the right hemisphere and build white matter and synapses in ways that would be useful for survival.  Even though the concept of the square school with the square classroom with one teacher to 20 or more kids has been around for a few hundred years, our boys are still young hunters whose brains need the same types of stimulation to grow and be healthy as did their male ancestors millennia ago. Our schools are vastly different from the setting of family, tribe and natural environment that used to be the educational milieu for growing boys. Our modern educational system works for many children, particularly girls, but for some boys (and girls) it places constraints on a very normal and necessary experiential type of learning that some kids require.

I am not advocating for a return to life in caves and an educational system for boys involving the activities and rituals described in my college anthropology book.  What I do advocate for is a greater understanding and appreciation for who boys are and how they learn best, and the subtle modifications to “how it’s always done” that would benefit millions of children.  Simple changes to the pace and tempo of the school day, such as incorporating several brief recesses throughout the day, devoting more time to physical education, and including more hands-on activities go a long way towards alleviating some of the natural restlessness of boys and harnessing male energy in positive ways.  Increasing a boy’s exposure to the arts nurtures his creative side and provides a counterbalance to the athletic nature of many boys.  Including more multi-sensory approaches to the teaching of academics, particularly reading and writing, helps boys reach their potential as learners, facilitating access across the corpus callosum to the left hemisphere of the brain where verbal skills, often less developed than in girls, reside.  Gurian’s book provides many other concrete examples of small things that parents and teachers can do that strengthen boys’ skills and that honor the true nature of boys.

Once an admissions director at an all-boys school, I would awake very early every morning and leave my sleepy daughter as she got ready for school, heading to the 304 boys who awaited me there.  Coffee helped me with this dramatic transition, but so did my excitement for whatever adventures the day would bring.  Many people ask me why I chose to work at a boys’ school, and my usual answer includes some version of, “Why not?”  I am fascinated by boys, by the way they think and learn, by their very difference from me and from the child I am raising.  Just as we collectively addressed the needs of girls over the past couple of decades and closed their achievement gaps in math and science, let us now turn our attention to our nation’s boys and take equally deliberate steps to assure their success in school and in life, as Michael Gurian suggests.  The revolution in brain science over the past ten years gives us the knowledge and the tools we need to do this, and we must, for as a society we are setting our boys up to fail in a system that is stacked against them, stacked against the very way they are neurologically wired. This is not to say that social and cultural influences are not contributing factors to who boys are today, but we now have medical evidence, once elusive, that illuminates the very significant role biology plays in male/female brain development and learning. We do not need to throw the baby out with the bath water, but we do need to become better educated about how boys and girls really are different, and how to best meet the needs of each.  At some colleges today, boys are being given a boost in the admissions process because they have become a minority.  If we do not address boys’ educational needs earlier in life than this, the skewing of college enrollment, and thus opportunity in life, will only get worse.

The other day I stood and watched a fourth-grade boy tossing a Nerf football with some friends on a patch of grass in front of his school.  It was a sunny day without much wind, and the ball spiraled to the right of the boy, to the left, over his head, seemingly always just out of reach, yet he caught it every time.  The perfect synchronization between his legs propelling him upward, in whatever direction necessary, and his outreached hands awaiting the ball, seemed almost a dance.  The physicality of it had that kind of beauty, and I observed with awe, knowing that my own body, even at that age, could never have accomplished what this boy made look so easy. I thought about how this very simple act, seen every single day in yards and on fields and playgrounds everywhere, was not just toning this boy’s muscles or improving his eye-hand coordination—it was actually developing neural pathways in his brain through which information will always travel, be processed, and be recalled during his lifetime.  This boy, and millions like him, and girls like him, which there surely are…all of them are in our hands.  Meeting the learning needs of all of our children is a lofty yet imperative goal.  The African proverb “It takes a village to raise a child” is an overused but apt statement, and in the villages of schools and of families and of communities, we must join together to nurture and celebrate what it is to be female and what it is to be male and the very essence and value of the difference. And after all, boys will be boys.